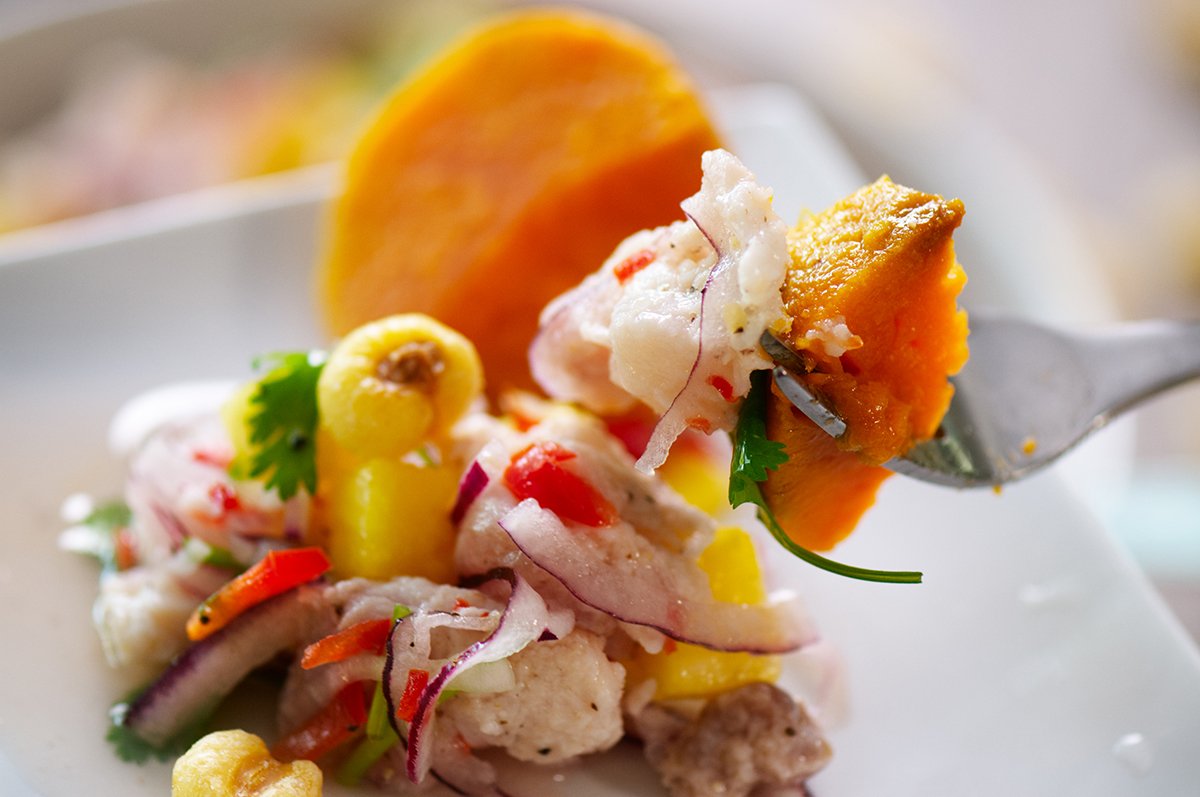 Everyone should have a ceviche recipe up their sleeve. It’s super fast and easy, but seems incredibly fancy and sophisticated. Ceviche, which is essentially fresh raw fish and some flavorings marinated in lime juice, is a perfect starter for a cocktail party but also works for a light dinner. And while ceviche may hail from Peru, I like to add a fun Asian twist to it. My Tropical Ceviche is light and bright, with a zesty dressing. It is one of the most requested dishes from our catering menu, because it is a crowd pleaser: delicious, refreshing, and colorful.

Ceviche is ubiquitous where we live in South Florida. You can have impressive high end ceviche at glamorous South Beach eateries, grandma’s classic recipe at mom and pop restaurants, and even mass produced ceviche from a local ceviche chain. No wonder it’s so popular: packed with flavor, showcases beautiful seafood, and drenched in a lively tart marinade. And the best part for home cooks is it takes 15 minutes to prepare, and can be made a couple hours ahead of time. Not Raw But Not Cooked

Ceviche is a great gateway dish for people who aren’t so sure about sushi. The fish gets cured, or “cooked” from the acids in the ceviche dressing. It has a similar look and texture to cooked fish. Since it isn’t really cooked though, it is important to seek out the best quality, sushi grade fish you can find. I like snapper for this Tropical Ceviche. Its meat has a slightly sweet taste and buttery texture, and it doesn’t turn to mush. Corvina is also a good choice. Ceviche relies on acids in the dressing, usually from citrus fruit, to cure the fish. I use both limes and vinegar in mine. All of that tangy acidic flavor gets rounded out with a little sugar, salt, and pepper. Stir the marinade with a spoon. Once the sugar is dissolved, set the dressing aside. You can also make the marinade ahead of time and store it in the fridge. It stays fresh up to a week.

Now it’s time to prep the fruit. This Tropical Ceviche calls for pineapple and lychees, which are both incredibly aromatic. Do you know how to pick a great pineapple? The key when selecting pineapple is to look for the most golden color. And try looking for one that’s golden all over, not just the base. You do not want to get one that’s very green, thinking you’re going to be choosing the freshest one. Most likely the interior will be a pale yellow, and incredibly tart. Finally, forget about pulling on one of the leaves, testing for ripeness. It’s not an accurate test. Not All Canned Fruit Are Bad

Canned fruit gets a bad rap. But I find canned lychees to be reliably good. Plus, the harvest season for lychees is so short, and some times, you just need a lychee in March! If possible, get your cans from an Asian store, which will have the highest quality brands. You will only be using 7 from the can, so it looks like you will have no choice but to also make some Lychee Mai Tais. Waste not, want not… Now For The Fish I like the fish to be the highlight of the dish, so I keep the pieces bigger than the other ingredients. You want to have nice chunks to provide good texture. Once all the fish is cut, put it in a non-reactive bowl. Stainless steel or glass are a good choice. (We don’t want something like aluminum which might react to all the acid from the lime juice and add a metallic taste.) Then it’s time to add the dressing. You will be amazed how quickly the fish appears to cook! Within a minute or two, you will notice it getting white and opaque. The liquid will also turn white, and at that point, you drain off the extra. If you want the full ceviche experience, you can chill the liquid and then down it like a shot! In less than 15 minutes, you have a delicious tropical treat! You can make this up to two hours ahead of time, just keep it chilled in the fridge. You don’t really want to go much longer than two hours though, as the citrus will start to break down the fish, and the texture will suffer. There are so many ways you can serve this Tropical Ceviche. It is traditionally served with sweet potato and giant corn in Peru, but it’s also great served in lettuce cups or as a dip with tortilla chips. However you enjoy it, we want to see! Tag us in your insta pics @funkyasiankitchen, or take a minute to comment below. * Ceviche is often served with sweet potato, giant crunchy peruvian corn, or even small pieces of corn on the cob. It’s also nice with lettuce cups or corn chips to scoop.